Andrews name is synonymous with a multitude of record-setting and race-winning ULDB sleds like Locomotion, It’s OK, Cheval, Alchemy, to modern TP 52’s and last year’s Cabo winner Fast Exit; but he started his iconic career with a 30-footer and has since designed a wide range of racers and cruisers.

Andrews’ design skills in combination with Moore’s renowned manufacturing expertise will deliver exactly what sailing needs now – a high-quality, mid-sized racer that exudes the designer’s signature graceful lines and elegant style but is just as focused on performance and speed.

The trailerable – yes, trailerable – sloop will be offered with options tailored for distance racing with a four-person crew or for buoy, day, or coastal racing with a crew of up to seven or eight. Hull numbers one and two are scheduled for release in the spring of 2021.

Earlier this year, Rorick, a long-time competitive sailor, and former yacht broker met Andrews to see if a vintage Moore 30 could be modified for offshore racing. That boat, so far ahead of its time, baffled PHRF rating officials who would not let it race. By the end of the initial meeting, the concept to build the new Moore 33 was born.

“It’s going to be screaming fast, capable of hitting speeds in the 20-knot range; long-distance capable but just as competitive in buoy and class racing competitions,” said Rorick. The Moore 33 can be configured to meet US SER requirements for offshore racing with key features planned for one-design, PHRF, and measurement-rule racing.

Innovation and Design
Andrews likened it to a production sports car with all the latest technology; with a strong but light, quality-constructed hull capable of maximum designed speed. The Moore 33’s beamier blueprint is in keeping with modern hull shapes (unlike earlier ULDB’s that were long and lean,) that increase power to carry sail, enhance planning, and overall performance.

“It’s a pretty cool boat; great for taking on long-distance or point-to-point races – then returning in the evening and trailering home,” Andrews said. “New sail technology in a square-top mainsail adds another dimension of innovation and mixes things up.”

For ease of trailering, Andrews has designed a retractable keel and with a displacement of 3,750 pounds; the light boat should be launchable from most yacht club hoists. Important to the concept is the appeal to an inclusive market of sailors; those moving up and those who want to downsize; reducing overhead and slip fees without diminishing the intensity of competition. Reducing maintenance costs also add to the affordability and versatility of the boat in hopes of broadening its appeal beyond its good looks.

“The drawings are gorgeous!” said Moore. “The design and planning part is the most fun, but I’m looking forward to the construction; sculpting the molds, the interiors, keel, and the rudder. This is one gorgeous piece of high-performance art.”
A History of Quality
Moore is best known for his still popular Moore 24 that launched 45 years ago. The still-active Moore 24 Class; a testament to the success of any boat brand, will be racing at 18 racing venues this calendar year.

While the Moore 24s sailed, the craftsman has spent the last 25 years on the fabrication of custom boats such as the Antrium 30+ Trimaran, composite bridge fabrications, stealth powerboats for the US Navy, R & D for Lockheed Martin Missiles and Space, and built astronomical/scientific enclosures delivered worldwide. Most recently, he has gained a working relationship with marine laboratories on the California Central Coast and the local Moss Landing fishing fleet.

“I’m so excited to build an assembly project from concept,” he said. Phase one of tooling, creating the mold and initial fabrication will commence this month. The second phase of tooling includes attaching the interior. The composite modules bond to the shell and are forged with aircraft-quality fiberglass lamination. Then Moore conducts the precision finishing.

“It’s going to be a sexy Italian-inspired hotrod!” he said. But he also believes it will appeal to a lot of boat buyers. “It’s a solid proposal; great quality for the price point.”

The secret to developing his reputation as an iconic builder is that extra 10% that the independent manufacturer puts into every project. “It’s the artist’s passion — high-quality work takes more time,” he said. Today’s modern, beautiful composite construction, spray gel overcoating, new fabrics, and improved resins, set new standards, and keeps Moore engaged; his creative RPM’s up for taking on new projects.

After launching the first two, the plan is to manufacturer one boat per month. When ramped up, the Watsonville facility will be capable of producing a boat per week.

A History of Success

After the first meeting, Andrews said Rorick’s directives were to design the smallest boat that could competitively and reasonably race to PV, Cabo, or Hawaii while being fun, fast, and easy to sail. “I take reasonable with a grain of salt,” he said.

After rolling off the line in next Spring, Rorick’s goal is to have the boat, complete with a competitive team of sailors, ready for the 2021 race and boat show season.

Additional specifications to posted on the newly launched Moore33.com. For those who want to be first to reserve their hull numbers, the company will be taking deposits for pre-production orders by the end of the month. 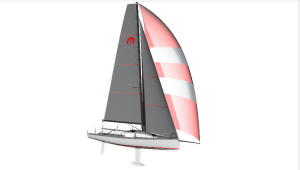 Starboard view: With a retractable keel and a removable rudder, the Moore 33 will be off to races near and far.

Port View: With its lightweight hull this Andrews-design boat will be fast and fun.

Moore Sailboats, Inc. was established in 2020 with the goal of producing a fine-tuned, wind-harnessing sailing machine; one that’s small but mighty, for distance and buoy racing with a show-stopping hull that appeals to a broad spectrum of sailors – those stepping up to maximize their skills and those who want to maintain sailing prowess on an impactful smaller boat capable of competing in more races in more places. The Moore 33 was designed by world-renowned sailboat architect Alan Andrews and will be built by the legendary Ron Moore at his Watsonville, California factory.
Contact Blaine Rorick, President, at Cell (909) 667-0123 ~
visit www.Moore33.com or @Moore33Sailing on socials for updates